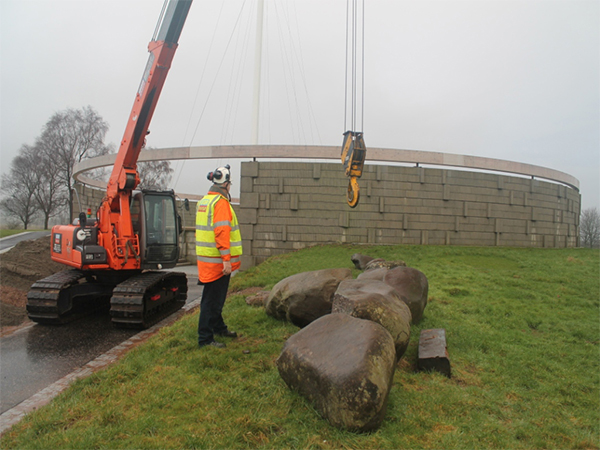 GGR were treated to a history lesson in the typically cold and rainy Scottish weather recently as a 8 tonne capacity MCC804 mini crawler crane was hired to lift 10 large boulders at the Bannockburn war memorial.

The Battle of Bannockburn took place in 1314 and this memorial site near Stirling marks the place where Robert the Bruce defeated England’s King Edward II even though his Scottish army was outnumbered almost three to one.

The telescopic crawler crane spent the day working at the battleground carefully lifting each of the stones, which weighed up to 2.2 tonnes, from one side of the monument to the other. The site’s architect was on hand to make sure that each rock was placed precisely where it was meant to be at the top of a flight of steps. The MCC804 compact crane was selected for this job because of its lifting power and slimline 2.49 metre wide chassis. To get to the working area the crane had to track up a narrow path from the car park, squeezing in between stone markers placed either side of it. The Rotunda monument was built in the 1960s and was recently inscribed with a poem by Scottish writer Kathleen Jamie. The site is looked after by the National Trust for Scotland and Historic Scotland.

This restoration work took place in preparation for the battle’s 700th anniversary in June this year. The heritage centre has also opened a new attraction which uses 3D technology help visitors recreate the battle.