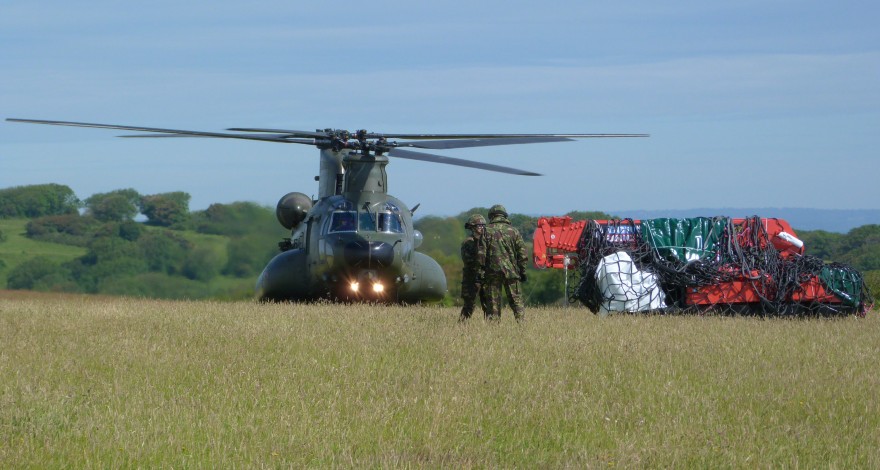 A World War II veteran’s long-standing dream to commemorate the 55, 573 men who lost their lives as part of Bomber Command finally got to see his plan come together recently as a Unic mini spider crane helped to install a new stone memorial at Beachy Head, Eastbourne.

The 6 tonne stone memorial was installed on this cliffside location after years of fundraising and campaigning by 90 year old Joe Williams, who completed 20 missions as a Lancaster Bomber rear gunner before being shot down over Czechoslovakia in 1945. Beachy Head was the last part of British soil seen by many of the RAF crews flying out to German-occupied Europe so it was a perfect location for this greatly-anticipated monument. Our 4 tonne capacity Unic URW-547 mini spider crane was used to precisely position the granite pieces of the memorial together on this restricted access area of coastline 450 feet above the English Channel. A crowd of spectators watched GGR’s team of expert operators as they carefully lifted the two sections into position on a central plinth.

An RAF Chinook helicopter was used to transport the stone loads and Unic mini crane from nearby Beachy Head Road to the memorial’s final location on the cliff edge. An RAF Chinook lifted our Unic mini crane onto site

Under the watch of a team of stone masons, the Unic URW-547 lifted the 2740kg base stone then the 2780kg cap stone, which is inscribed with the message “Remember Them”, on top of it so the pieces fitted together perfectly. Once the job was complete the crane was folded up ready to be transported back to the main road by helicopter.

Take a look at the Unic URW-547 in action at Beachy Head in this video.

In August 2011, GGR’s Technical Director Craig Parkin supported the Bomber Command cause by winning the chance to fly in a Spitfire at a charity auction held to raise money for the memorial.

Follow the link to find out more about the Bomber Command Memorial project.