Corporate social responsibility and supporting good causes has always been part of the GGR Group culture but our charity work is not just about signing cheques. We are passionate about getting involved within our local communities & helping good causes. GGR Group’s commitment to supporting charitable projects often gets us involved with fundraising and volunteering activities. We always have great fun whether we are holding a coffee morning, growing moustaches or wearing our Christmas jumpers; giving back makes our jobs that bit more worthwhile. We often support charities that are close to the heart of our team or causes that have helped a loved one in a time of need.

Whatever the cause the GGR family are always happy to help. To celebrate 20 years of innovation GGR decided to support even more good causes, we took on the challenge of donating to 20 charities over the course of 2015. We kicked the year off with a donation to Age UK’s Men in Sheds project and ended the year with a donation of toys to Wood Street Mission. Other charities we supported through the year included Nightingale House Hospice, Team Margot, Macmillan, Racing for MND, Help for Heroes Rally and Sunsport. Alongside our regular charity work we sponsor children’s rugby, cricket and football teams as well as a promising young race driver. Keep an eye on our blog for all of the latest charity news. 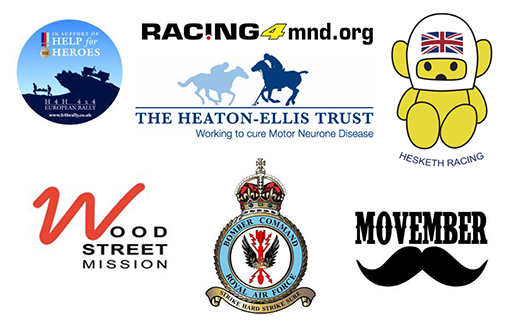 Team Margot was set up in memory of little 2 year old Margot who lost her battle with Leukaemia in October 2014. Since losing their precious daughter, Margot’s family have been campaigning tirelessly to raise awareness of leukaemia and the need for more bone marrow donors to be on the international donor register.

Every 20 minutes someone in the UK is diagnosed with a blood cancer such as Leukaemia, Lymphoma or Myeloma and only 30% of those people find a donor within their own family. This is why it is important for as many people as possible to register to become a donor. Delete Blood Cancer UK’s vision is a world where there is a willing and suitable donor for everyone who needs one. They ask – Could you be someone’s match?

The Delete Blood Cancer UK team visited our Long Crendon Depot to receive their cheque and to meet some of the GGR team that signed up to join the register. Men in Sheds is a project operated by Age UK Tameside and Tameside Metropolitan Borough Council. It is for mature men in the borough of Tameside who might be socially isolated due to, amongst many other factors, loneliness, dementia/Alzheimers or having been widowed.  The project’s overarching purpose is to welcome and support “Shedders” with workspace and facilities to pursue hobbies, practical interests, share skills, learn new skills, help with community-based projects and develop new aims and ideas. The project is funded entirely through donations. Everyone is welcome to call into the ‘Shed’ based in Loxley House, Dukinfield. The ‘Shed’ is open Monday-Thursday from 9am to 3pm. Activities are free for men aged 55+ and are always friendly, informative and fun.

To find out more about Men in Sheds visit www.ageuk.org.uk/tameside/our-services/men-in-sheds

As part of our birthday celebrations, our April charity was Nightingale House Hospice in Wrexham.  The hospice has been providing expert care for patients and their families for over 20 years. The hospice employs an expert team that provides medical, practical and emotional support around the clock meaning that running costs are high. As with all charitable organisations, Nightingale House Hospice works tirelessly to raise the funds it needs to keep running.

All donations made to the hospice are used to continue and improve patient care. Every penny counts and the donations made make a real difference to patients and their families in your local community.

GGR are very proud to support this cause and we hope that our donation can help this amazing organisation to carry on with their work.

Sunsport is a holiday activity programme providing high level support to young individuals with a variety of learning and physical disabilities. Sunsport runs during school holidays and organises activities including rock climbing, circus skills, football, athletics, walking, swimming canoeing and much more. There are fully trained support workers on hand to make sure all participants are able to get the most out of their experience. Sunsport is currently raising funds to buy an accessible minibus so they can offer even more services to their participants. GGR has made a donation of £1000 to the minibus fund and we hope that the target is met soon so that the bus can be up and running as soon as possible.

Another great cause that we are proud to support as part of our 20 charities for 20 years of business challenge; read about the other charities we have supported so far this year in our blog.

For more information on Sunsport visit their Facebook page or to make a donation please contact graeme.hill@link4life.org Each year the fleet of 4×4 vehicles and over 100 crew members set off from Littlecote House Hotel in North Wiltshire on a two expedition covering 2000 miles across seven European countries, trip visiting battlefields along the route of the Allied Invasion.

The 4×4 European Rally has raised an amazing amount of money for Help for Heroes which will help wounded, injured or sick military servicemen and women in the UK.  Several of GGR’s staff are ex-forces so this is a charity that is very close to our hearts. The rally organisers announced in Summer 2014 that they had hit an important fundraising milestone, raising an impressive £750,000 since they launched the annual rally in 2010. Ben Collins, a.k.a BBC Top Gear’s “The Stig” has also become an official patron of the charity rally.

To find out more about the Help for Heroes 4×4 European Rally take a look at their website and click here to make a donation. You can also keep up to date with the rally’s progress by following them on @h4hrally on Twitter. GGR Group has sponsored a budding racing champion, 12 year old Theo Hesketh from Cheshire, who is part of Tarporley Karting Team, the largest school karting team in the country with 60 drivers aged 11 to 18.

Theo currently competes in Class 14, where drivers aged 10 and over race karts with 85cc 2-stroke Raket engines, but hopes to progress up to the faster races in Formula TKM in the near future.  GGR’s sponsorship helped Theo get some new tyres for his kart which saw him come in 4th place in his class at the National Championships earlier this month.

As Theo’s sponsors, GGR also donated some branded stickers for the kart and provided Theo and his Dad with a new team kit, t-shirts and hoodies featuring the Hesketh Racing teddy bear logo. Theo is related to Lord Alexander Hesketh who founded Formula 1 car constructors Hesketh Racing in the 1970s.

Many famous Formula 1 drivers started their careers on the junior karting circuit, such as Alonso, Button, Hamilton and Vettel – so hopefully we’ll see Hesketh join this list of racing champions in the future.

GGR Group provided Chinnor Rugby Club with the funds to buy them a new team kit. Gill also sponsors her local junior rugby team, the Chinnor Rugby club in Thame and recently provided funding for the team to play in a mini rugby tournament in Treviso, Italy. GGR Group provided a mini crane and operator free of charge to erect a WWII memorial stone commemorating the lost lives of 55,573 men at Beachy Head, Eastbourne.  The 6 tonne stone memorial was installed on a cliff-side location after years of fundraising and campaigning by 90 year old veteran Joe Williams.  An RAF Chinook helicopter was used to transport the stone memorial and GGR’s mini crane to the memorial’s final location on the cliff edge.

As the men of GGR are not the type to shy away from a challenge, 12 of our workshop staff joined in Movember by growing some face fuzz to raise some money for this good cause.

Movember is a campaign where thousands of men in the UK grow a moustache, or “mo” for the month of November to raise money and awareness for men’s health, specifically prostate cancer and testicular cancer.  To find out more visit the Movember website. The charity asked for gift donations so they could help make sure that every child got a present to open on Christmas day. This was the result, toys taking over the GGR boardroom!

To find out more about Wood Street Mission and their projects visit their website. www.woodstreetmission.org.uk GGR Group chose to support Salvation Army with their Present Appeal at Christmas.

The charity asked for gift donations so they could help make sure that every child got a present to open on Christmas day. The deadline for all gifts is set at the 15/12/2021.

To find out more about Salvation Army Present Appeal and their projects visit their website.