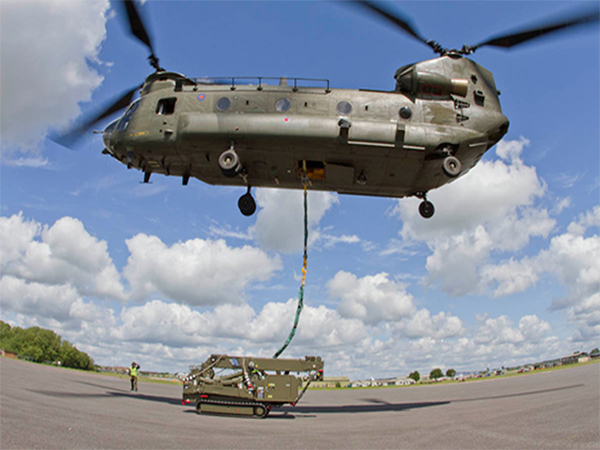 The project was delivered by the MOD’s Defence Equipment and Support (DE&S) Air Commodities team, with project management support by Land Equipment through flexible resourcing.

The cranes are a modified variant of our UNIC URW-376 mini crane used in the construction industry worldwide.

Chinook Junior Engineering Officer in theatre, Flt Lt Gareth Winn-Morgan, said: “Since its purchase, the mini crane has been a key factor to sustaining Chinook operations on Operation Herrick. It gives engineers added flexibility when removing heavy components from the aircraft; before the aircraft would be towed into a hangar to utilise the gantry cranes; with the spider crane the engineers can carry out heavy maintenance on the flight line, saving valuable time.”

The cranes have a maximum capacity of 2.9 tonnes at 2.5 metres extension. A six-section boom allows a working radius of more than 14 metres. The cranes were purchased under a major contract with Terberg DTS UK and delivered inside four months along with spares, support and training.

Gp Capt Greg Underhill, Air Commodities leader, said: “It is a testament to the dedication and hard work of the UOR team and Terberg that we were able to deliver this excellent piece of equipment with a comprehensive support package within demanding timescales.”

“We have a number of key contracts with Terberg under which they have provided excellent airfield equipment and support. Drawing on this relationship and their particular expertise with this equipment has proved vital to the success of this project.”

Alasdair Cooper, Managing Director of Terberg DTS UK, added: “We were delighted to be awarded this contract with DE&S and extremely pleased that we were able to deliver this critical equipment on time and on budget.”

Work is ongoing to consider whether the equipment will be brought into the core programme.

The GGR Group is an official corporate sponsor of the 2013 Help for Heroes 4×4 European Rally, after supporting the 2012 rally which has raised over £500,000 for the charity. To donate or find out more information about the event visit www.h4hrally.co.uk