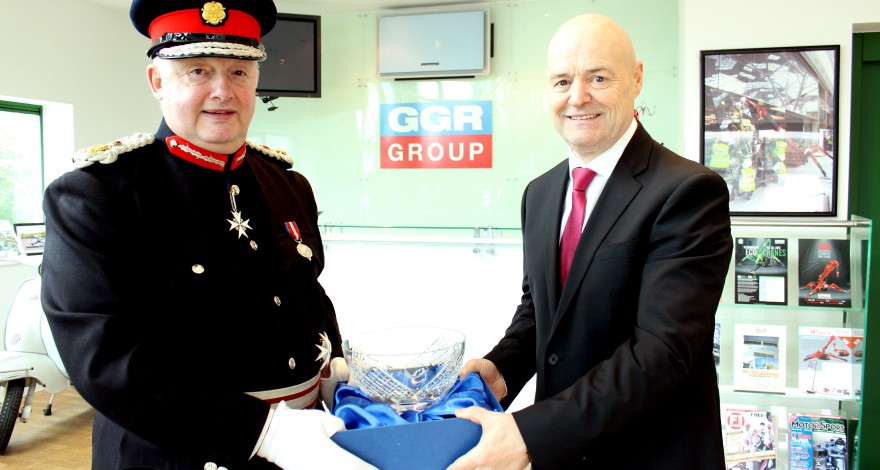 Representatives from the GGR Group were officially presented with the Queen’s Award for International Trade at their Head Quarters in Oldham, Manchester. The Queen’s Awards for Enterprise are the UK’s most prestigious business awards, given only to companies or individuals who are outstanding in their field. Now in their 50th year, this year has seen a high water mark of a total of 254 awards being presented, 150 for International Trade.

GGR Group wins the Queen’s Award for International Trade for Outstanding Achievement Award by using the successful business model of purchasing products from Japan, adapting them for the European market and selling them through a network of 27 dealers across Europe and the Middle East.

The company has seen steady growth in overseas sales, which has almost doubled in the three year period of the Award and accounts for 25% of total turnover. There has been steady growth in staff numbers from 95 to 115, bringing gross value added to the UK economy and net profits almost doubling in the period. GGR Group is not standing still and has international growth ambitions by capitalising on the existing dealer network by expanding into Russia, South America and Africa.

Commenting on the award win, Graeme Riley CEO said “We are honoured to receive such a prestigious and globally recognised award. Receiving the Queen’s Award is testimony to the hard work and dedication of the staff here at GGR. It reinforces our position as industry leaders and innovators in the specialist lifting market”.

The business was established in 1995 by brother and sister team Graeme and Gill Riley, who now hold the posts of chief executive and managing director respectively.

From small beginnings, the company employs over 100 people across three UK sites; its headquarters in Oldham, near Manchester; Long Crendon in Buckinghamshire and at Blantyre in Scotland. The company also has a network of around 30 dealers across Europe and the United Arab Emirates.