Germany take a pair of the world’s strongest mini cranes 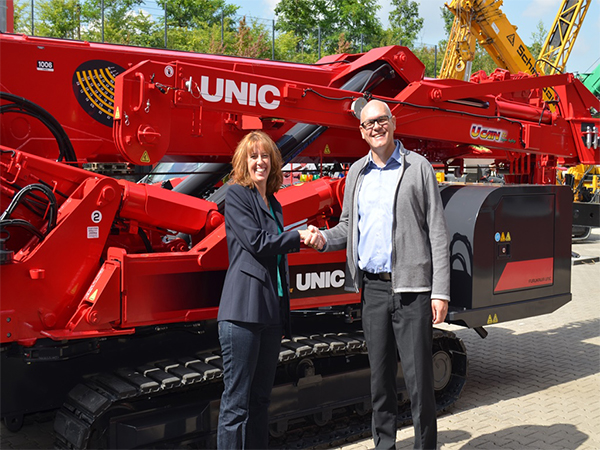 Germany take a pair of the world’s strongest mini cranes

GGR’s 10 tonne capacity UNIC URW-1006 mini crane is proving more and more popular for taking on heavy duty lifting operations the UK as the strongest spider crane in the market. However it seems as though it is also catching on in Germany as a customer has purchased not one but two URW-1006 models from our official German UNIC dealer. UNIC Cranes Europe, part of GGR Group and the European master distributor for UNIC mini spider cranes, has now sold a total of three UNIC URW-1006 cranes to our German distributor since the machine was launched at the Intermat Paris show in 2012. Another two URW-1006 models have also been sold to Switzerland and the Netherlands.

In the UK, the UNIC URW-1006 mini crane has been hired for a variety of jobs including installing high level glazing in Manchester, lifting cars onto a rooftop for an event at Silverstone race course and carrying out maintenance work at East Claydon electrical substation.

Holding the record as the world’s strongest mini spider crane, the UNIC URW-1006 can work at a 24.3 metre radius, lift to a 30.7 metre height, has a 1.5 tonne pick and carry capacity and is just 2 metres wide when in its stowed position. No wonder Heavydrive took two of these mighty machines!

To find out more about hiring or purchasing the UNIC URW-1006 mini crane in the UK, contact your nearest GGR Group depot. However if you are based in Europe or the UAE, take a look at official UNIC mini crane dealers in your country on the UNIC Cranes Europe dealer page.