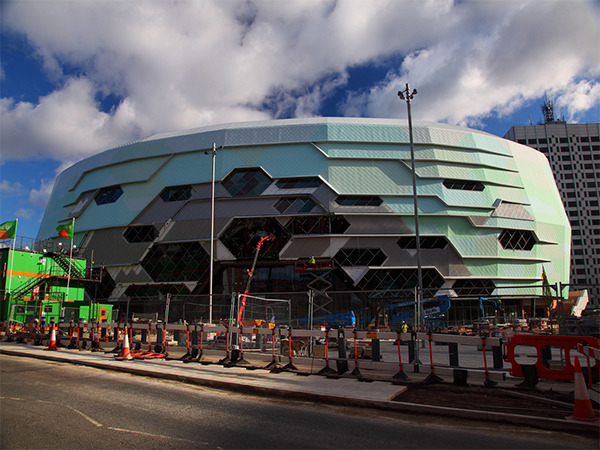 A 6 tonne capacity UNIC spider crane and one of GGR’s expert operators spent four days on site installing a number of external angled screen glass panels to areas of the structure’s façade that were particularly hard to reach.

The UNIC URW-706 mini crane was fitted with a GL-UMC600 robotic glazing head to lift and install the 200kg trapezoidal shaped units at a 15 metre height. The 600kg dual circuit glass manipulating head is able to rotate loads by up to 95° and tilt by 120, independently powered by electric actuators. The First Direct Arena has a very distinctive look, its honeycomb design façade contains thousands of lights which change colour to create a kaleidoscope effect. These lights can be altered to suit whichever act is performing that night, for example they can turn pink for Pink or green for Green Day.

This venue is also unique in that it is fan shaped, rather than the traditional bowl layout, which offers a better acoustic experience for the crowd. The arena’s double layered acoustically sealed roof will make sure that nearby residents aren’t disturbed. The £60m project to build a 13,500 capacity arena in Leeds city centre started in 2011, and the completed venue was able to open its doors on schedule this summer in spectacular style with a Bruce Springsteen concert. Over the next few months the First Direct Arena will host performances from Elton John and Leeds natives Kaiser Chiefs.

UNIC mini cranes have been used on a number of projects in Leeds city centre recently, including installing glass at the Everyman cinema and lifting a giant horse sculpture at the Trinity Leeds shopping complex.  Spider cranes have also worked on other big music venues, the Harpa Concert Hall in Iceland for example.