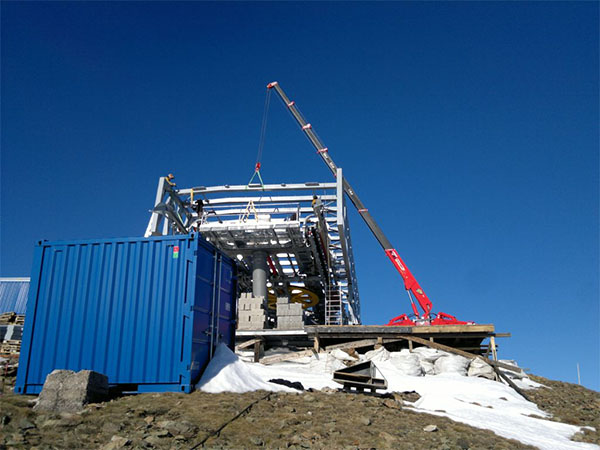 Sněžka Mountain is the Czech-Polish border and standing at 1602 metres above sea level it is the highest point in the Czech Republic. The mini crane was hired to lift steelwork for a brand new chairlift station to replace the oldest operating cableway in Europe which until last year had been running since 1949. The cable car connects the mountain town of Pec pod Sněžkou with Sněžka station at the summit. Initially a helicopter was going to used to lift the crane to location from the road drop off point, but once the team looked at the footpath which led up to the pinnacle, they were confident that the mini crane’s sturdy traction system could handle making its own way up there. Once at the mountain’s peak the mini crane worked so efficiently it could play catch up whenever operations had to stop because of bad weather conditions – heavy snow and 120 km/h winds! This isn’t the first time a UNIC mini crane been taken to a mountaintop, a UNIC URW-706 was lifted by helicopter to dismantle telecoms equipment on the 3697 metre high Mount Jungfraujoch in Switzerland.