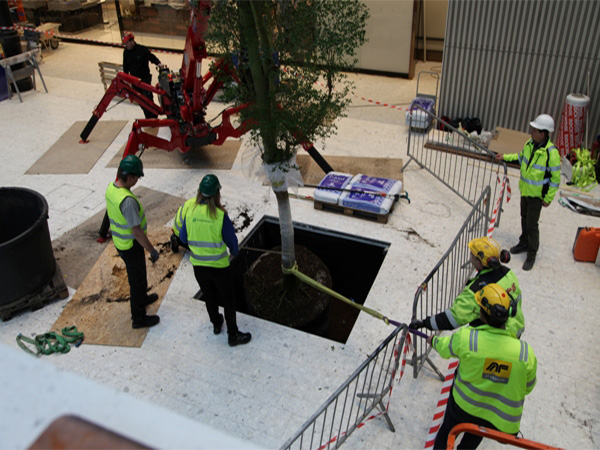 A mini spider crane hired from official UNIC dealers in Norway, Knutsen Maskin A.S, was used to plant trees in Oslo’s Central Station. Oslo Central Stationis the largest railway station within Norway’s rail network. There have been major renovations taking place in the station since Autumn 2013 to make the station one of the most modern public transport hubs in Europe.

A UNIC URW-295 mini crane was used to lift each of the 9m high, Bucida Buceras ‘Shady Lady’ trees that were specially imported from Florida. The trees weigh around 1 tonne each; the 2.9 tonne capacity crane lifted the trees into place with ease so they could be safely planted on the station concourse.

These colossal trees are much more suited in the warm climate of Florida, so much so that there had to be careful plans in place to get them from the transporter into the station. A special tunnel was built, heated at both ends, to get the trees into the station safe and warm. Perhaps these leafy trees will make travellers forget the Norwegian cold as they dine in one of the station’s new restaurants.

The UNIC URW-295 mini crane is a brand new addition for the Norweigan dealer and the first of four new UNIC cranes recently added to the fleet in Oslo.

The UNIC URW-295 mini crane is one of the leading compact cranes in Europe; small enough to allow access through a standard doorframe, but with 2.9t of lifting power. This spider crane leads the way technically with a multitude of safety features including a computer-controlled, intelligent voice warning system.

If you are interested in hiring or purchasing a UNIC mini spider crane for your own lifting project, please get in touch with your local UNIC dealer for further information and guidance.