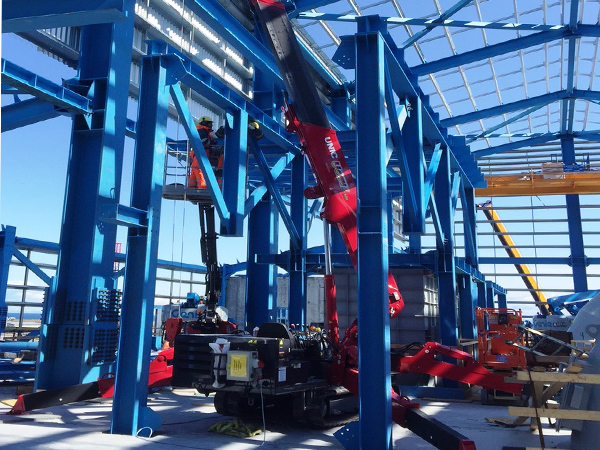 Our mini-yet-mighty URW 706 spider crane has been put to work on a new silicon metal smelter in Iceland. It was delivered to the site in Helguvik, near the Scandinavian island’s international airport, via our local dealer, Smakranar. For its first job, the URW-706 was lifted onto the third floor of the new building, where it then set to work in lifting two high-power electric control boards. The 706 then moved the boards up to their final resting point on the fourth floor.

Erlingur Snær Erlingsson, owner of Smakranar, said: “This lift worked out perfectly and all relevant parties were thrilled with the power and precision of the 706.  Also, the radio remote was a very important factor for both lifts. It was really easy for the operator to see critical points, such as the closeness of boom to the steel structure and seeing the load being lifted from the ground floor.

“The crane is now on the top floor installing over 20 tonnes of steel structures and will perform various lifts all around the building.  Later this summer, it will go inside the international airport in Keflavik to install about 40-50, four tonne concrete beams as the airport is being expanded.

“We are delighted to have the 706 as part of our fleet.  It’s something I’ve been dreaming about since 2007 when it was introduced to the market. It’s great to be able to put it to work straight away.” Graeme Riley, chief executive of UNIC Cranes Europe, said: “It’s fantastic to see the URW-706 being used on prominent national and international projects. With its six tonnes of lifting power but still compact enough to get into small spaces, it’s perfect for a wide range of jobs.

“We’ve worked with Erlingur’s company for over 10 years in Iceland, and our partnership is going from strength to strength.”

UNIC Cranes Europe, as part of the GGR Group, offers a complete range of mini spider to dealers throughout Europe and the United Arab Emirates.

The group was established in 1995 by brother and sister team Graeme and Gill Riley, who now hold the posts of chief executive and managing director respectively. From small beginnings, the company employs over 100 people across three UK sites; its headquarters in Oldham, near Manchester; Long Crendon in Buckinghamshire and at Blantyre in Scotland. The company also has a network of around 30 dealers across Europe and the United Arab Emirates.

For more information on the 706, visit www.uniccranes.com/spider-cranes/urw-706/