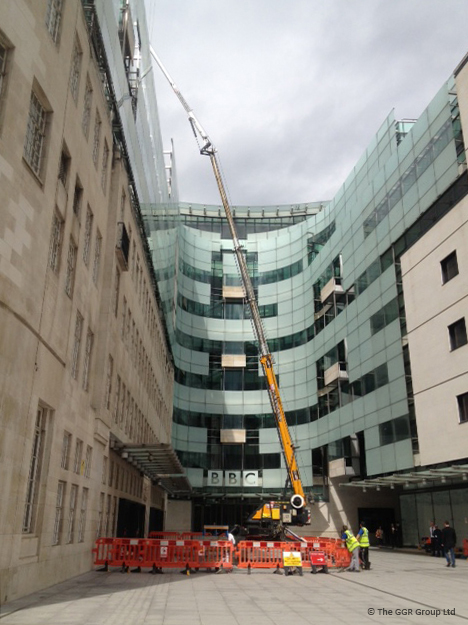 When 28 metre high glass needed to be replaced at the BBC’s Broadcasting House building in London, GGR’s Starworker 1200 trailer crane was on hand to help.

Broadcasting House at Portland Place is a grade II listed building that is home to BBC News and Radio 1. Around 6,000 BBC staff now work here after many of the BBC’s radio and TV programmes moved over from Television Centre.

As part of its modern makeover, a large wing with an impressive glazed façade was built at the rear of Broadcasting House to connect the two buildings either side. This new area was opened by Her Majesty the Queen in June 2013.

Using a P11104 4-in-Line glass vacuum lifter, GGR’s Starworker 1200 was able to lift 130kg glazed panels to the upper levels of the building for installation. This was a tricky job as the Starworker needed to work around the 4 metre high canopy and lift each unit behind the glazed front screen to reach the internal façade.

GGR’s range of trailer cranes are a great alternative to mobile industrial cranes for high level lifting in restricted access areas.  They can be easily towed, helping to save on transport costs. Take a look at the more compact Starworker 1000 and the higher capacity Starworker 1600.