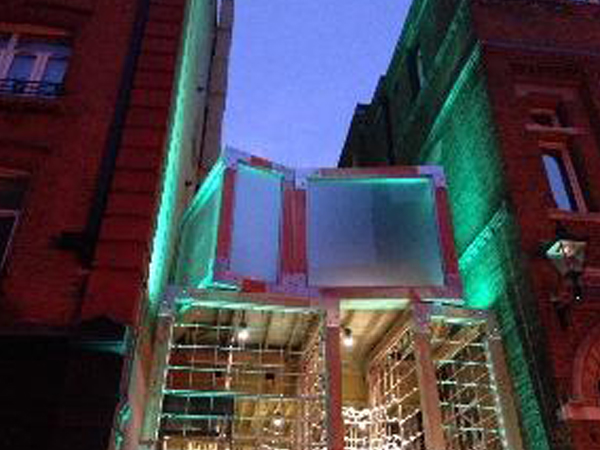 A GGR mini crawler crane has been used to install a new, modern entrance and play area at Soho’s Parish School. The school redevelopment programme is the culmination of three years of fundraising and GGR are delighted to have helped the contractor to complete the project.

Soho Parish is a small state school situated in a Victorian building in the heart of Soho, on Great Windmill Street.  The school’s tiny playground and classrooms mean that it can only accommodate 22 per class, much smaller than a typical London state school.  Part of what attracts residents, businesses and millions of visitors to Soho is its ‘village’ feel in the centre of a great city. As the only school in Soho it has an important role to play in the village – providing jobs, enabling families to live in the area and enriching the community by providing a focal point to bring it together. The contractor specialises in the design and installation of natural playgrounds, play areas and landscapes in schools, nurseries and public parks. The scheme designed for Soho Parish School includes the addition of an extra storey to the existing playground, along with vertical climbing areas and a cargo net suspended under the decking; the redevelopment increases the useable play area by 60%.

The new play area is made up of eight cubes each weighing up to a tonne; the mini telescopic crawler made light work of lifting and installing the cubes. Its 2.35m wide base and solid tracks provide it with the stability to lift and travel with loads up to 2 tonnes in weight.

The MCC495 also used its static lifting power to install the brand new school gates that weighed in at 1.25 tonnes and screens at almost 2 tonnes each. The school entrance has been completely redesigned, presenting an attractive, fresh street façade.  As well as enhancing the look of the area, it also ensures that the school is no longer hidden away behind black gates but is a visible part of our community once more.

We hope the children will be very happy with their new playground! GGR’s mini cranes have been called upon to work at schools many times, check out some of our previous school jobs in our blog. Thank you to the contractor for their images of the project