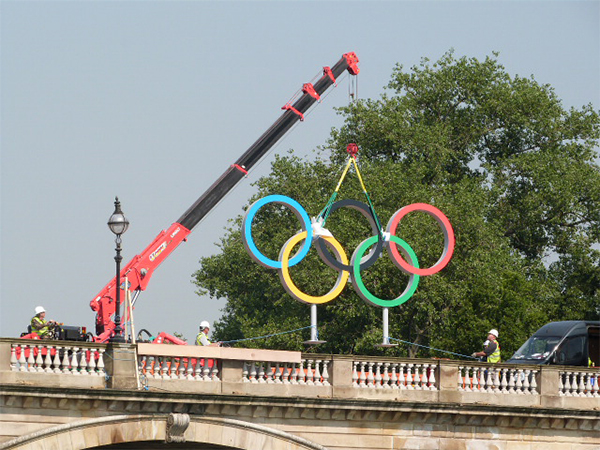 It’s now less than 10 days until the excitement begins in Brazil between August 5-August 21, more than 200 national are expected to participate in the Brazilian spectacle.

It’s hard to believe it’s four years now since GGR played its part with a series of jobs in the run-up to London.

Here’s four of our favourite jobs:

In At The Deep End! 500 days before the action even started, we were working on the Aquatic centre. GGR Group provided a Unic 506 mini crane and Hydraulica 1000 vacuum lifter to lift and install 4.5 meter panels on the inside of the pool. The 50m competition pool and training pools used over 180,000 tiles and hundreds of glass panels. These were located directly underneath the starting blocks, so you were able to see our handy work at the beginning of each race!  Our Technical Manager, Tony Lawrence even made an appearance on BBC Oxford News where he talked about our work at the site. Watch Tony’s starring moment here. Unic mini cranes were also used to help prepare the Lee Valley White Water Centre in Hertfordshire for canoe competitions. With some help from our Glassboy floor cranes, Unic spider cranes assisted in fitting visitor handrails and building pedestrian bridges around the course. More Glassboy cranes along with a Geko glazing robot were also hired to install stainless steel plates on the Central Park Bridge back at the London Stadium site.

GGR On Call for Rings GGR was hired to install the famous rings over the Serpentine River in London. The 3 tonne capacity Unic URW-506 model lifted supporting posts and the rings themselves, which weighed 1200kg, over the side of the bridge and into position above the water ready to be fitted by a team in the boat below. The quick set-up and efficient operation of this mini crane meant the job could be completed quickly and the bridge could be reopened to the public in no time at all. Unic URW-376 mini cranes were used for lifting operations on two of the Games biggest venues – The London Stadium and the Velodrome. The 2.9 tonne capacity mini crane model helped install lighting tracks for stairwells in the seating area at the stadium and lifted over 400 timber trusses to be laid under the Velodrome’s cycling track.